Besides some simple equipment, all that's needed to play bocce is a spirit of fun and good sportsmanship. Any time is a good time to play bocce. It's not tied to any seasonal conditions, and you'll fall in love with this game, as you face its athletic and strategic challenges.

Court reservations are available up to one week in advance and are highly recommended. Please call 248-371-9987 ext. 0

Maximum of 12 people allowed per court at any time

Generally 80 minutes of play with the remaining time allocated to instruction, payment and departure for the next reservation.

Just as you expected that your bocce court would be clean and ready for you at your scheduled reservation time we ask all of our guests to please be mindful of other guests that have a reservation afterward.

New to the game of bocce? Learn how to play the game by downloading our rule book.

Our Official Supplier for Bocce Gear

Looking to quickly get to know the game? View our bocce videos with plenty for everyone. 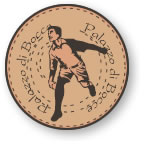 Teams will be comprised of four players. Two players from each team will be permanently stationed at each end of the court, throwing two bocce balls each. At the end of each frame, the game resumes at the opposite end of the court.

Begin the match with the flip of a coin between the captains of each team. The winner of the coin flip may have the first toss of the pallino (small target ball), or choose the color of the bocce balls. 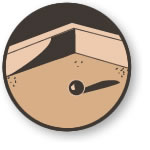 The first ball will be thrown by the team that originally tossed the pallino. If that bocce ball hits the back board, the ball is removed from the court and the team must roll again until they have a ball in play. The other team throws until it beats (not ties) the opposing ball. This continues until both teams have used all their balls. Whenever a team gets a ball closer, it steps aside and lets the other team roll.

The team that scored last throws the pallino to begin the next frame. Consecutive or alternating throws by teammates shall be at the option of the players. Players may use the side walls at any time. If a player rolls the wrong color bocce ball, simply replace it with the correct color when it comes to rest.

If a player rolls out of turn or plays more than two balls, the other team may leave all balls as is or remove the illegal ball from the play and return all bocce balls to their approximate position. 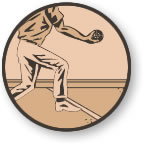 Bocce Balls Hitting the Back Board

Players may step on but not over the foul line before releasing the pallino or their bocce ball.

Only one team scores in a frame. One point is given for each ball that is closer to the pallino than the closest bocce ball of the opposing team. If at the end of any frame the closest bocce ball of each team is at equal distance from the pallino, the ball that was thrown first gets the point. Games are normally played to 12 or 15 points. The tournament host may change this number. 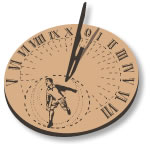 Pallino Hitting the Back Board

Team captains may measure any bocce balls at any time. All disputes will be resolved by the tournament host.

A team missing players at the start of the game may play, however, each player may only roll two bocce balls. (A player arriving late may enter a game, but only after the completion of the game.) A team may make one substitution per game. Substitutions may only be made between frames.

Remember, You Don't Have to be Italian to Play Bocce

The Beginings of the Sport

Throwing an object toward a target is considered the oldest game known to mankind. Graphic representations of the sport, recorded as early as 5200 B.C., have been found in Egypt and the MiddleEast. While the game of Bocce today appears quite different from the ancient version, the consistently common objective of trying to come as close as possible to a fixed target remains intact. From this early objective, the basic rules of Bocce were born. The game made its way from Egypt to Greece around 800 B.C. The version of the game resembling what we know as Bocce today was refined by early Romans, who adopted the game from the Greeks and introduced it throughout their empire. Beginning with Emperor Augustus, Bocce became the sport of statesman and rulers. The Roman influence lives on today. The game's name, Bocce, is a derivative of the Vulgate Latin bottia, which translates as "boss".

European history is filled with references to Bocce, both good and bad. The Greek physician Ipocrates and Italian Renaissance man Galileo both noted that the game's athleticism and spirit of competition rejuvenated the body and the mind. Somewhere, the claim arose that playing Bocce had great therapeutic effect in curing rheumatism, and consequently the game enjoyed rapid growth throughout Europe as the sport of nobility and peasants alike. As Bocce's popularity grew, it began to threaten and interfere with the security of states. Kings Carlos IV and V of Spain prohibited the playing of Bocce because it took too much time away from military exercises. The Republic of Venice publicly condemned the sport in 1576, and punished players with fines and imprisonment. Perhaps the gravest condemnation of Bocce came from the Catholic Church, which officially prohibited clergy and deterred the laity from playing the game by proclaiming Bocce a means of gambling. Contrary to the rest of Europe, British nobility such as Queen Elizabeth I and Sir Francis Drake were avid players. According to lore, Sir Frances Drake refused to set out to defend England against the Spanish Armada until he finished a game of Bocce. He proclaimed, "First we finish the game, then we'll deal with the Armada!"

The sport first came to America with the English, with one early American playing field being Bowling Green at the southern tip of Manhattan. Though George Washington built a court and played regularly at Mount Vernon in the 1780s, the game did not flourish until turn of the century Italian immigrants brought their enthusiasm for the sport with them to America. During its beginnings in the U.S. there were many versions of the game. In 1947, fifteen teams in and around the town of Rivoli (Torino) organized the first Bocce "club", first Italian League, and the first of the yearly World Bocce Championships, bringing some order to the game. This idea of "order" soon spread to the new world, though the game is still played by several different sets of "regional rules" in the United States.